The Bailey's Crossroads Volunteer Fire Department is non-profit volunteer organization charged with providing fire and emergency medical services in the Baileys Crossroads and Seven Corners communities of Fairfax County, Virginia. The organization also provides emergency and non-emergency services to adjacent areas in the City of Alexandria and the County of Arlington, based on existing mutual aid agreements. Emergency services are provided in partnership with the Fairfax County Fire and Rescue Department, a county government organization. Under the partnership agreement the volunteer organization is responsible for furnishing all apparatus, equipment, facilities and supplemental staffing; while the county government organization is responsible for the staffing frontline units.

The Baileys Crossroads Volunteer Fire Department was founded in 1942. The original two-story firehouse that stood at the intersection of State Route 7 and Columbia Pike and was home to five career and forty volunteer firefighters. In 1974 the Bailey's Crossroads Volunteer Fire Department moved to a new station at its present location. A few years later, Fairfax County began staffing all fire stations with full-time career fighters around the clock. After the station suffered a partial roof collapse during the snow storm of February 8, 2010, plans for a new fire station were developed. Currently the department is housed at a temporary facility while the new station is erected. The department proudly serves the community with: one frontline fire engine; three emergency medical apparatus (ambulances); one ladder truck (owned by the county) and a utility vehicle.Bailey's Crossroads Volunteer Fire Department operates as Fairfax County Fire Station 10. With over 8,869[1] emergency responses every year, Station 10 is one of the busiest fire stations in Fairfax County. The departments first-due area of responsibility is comprise of an urban geographical area of approximately 3.5 square miles that includes a towering group of 26-story apartment buildings and offices built in the 1970s, known as The Skyline Center. The department serves an ethnically, racially and economically diverse population of over thirty-two thousand[2] , with a wide range of immigrant populations. According to census data, the population density in the departments first response area could be as high as 13,531 residents per square mile in some areas; considerably higher than the Fairfax County average of 2,767 residents per square mile. 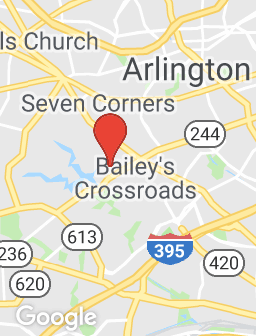