Attending AFSSA was such a great experience, just getting to know that a program to help Asian families with such a wide variety of services such as domestic violence to financial troubles is such a wonderful thing to know. The orientation was an info session that explained all the services that the organization provides as well as the different types of people that would be in need of such services. They had also explained that to be a volunteer in some of their more involved services, I would have to attend additional volunteer training, but since I would be unable to make the time commitment due to being a student, they would just alert me to volunteer events happening in the university that I may be able to be a part of. This was an introduction to the agency and I'm very excited to start volunteering after my training! 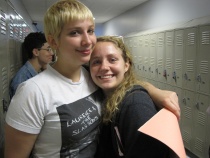 The event was a little bit disorganized at first as there wasn't really a clear leader for the volunteer group, but after the initial confusion subsided, everyone worked hard and finished setting up just in time for the event. I would definitely help out with this and similar events again!

Setting up for the banquet was really a blast. It was a lot of hard work, but at the end, it looked beautiful. At the end, I felt a lot better, and I am glad that I volunteered for this event.

Gave 3.00 hours on 11/15/2014 with The University of Texas at Austin, University Leadership Network Although this was extremely fast paced and in a rush, I really loved helping out here because I could see a more direct result of my help. Setting up tables with forks, spoons, glasses, decorations, moving extremely heavy tables and kitchenware was all worth it at the end. I was also able to make some new friends with other UT students which was a nice bonus. I learned a lot about the impact that i can make in my community especially for the impoverished immigrants who hesitate to ask out for help due to language and cultural barriers. I would recommend it to anyone who wants to work in social justice and law areas.